Christmas holidays and dates to note in January

As we wind down the term for the Christmas break, we are already thinking ahead to 2018! Please note that, due to scheduled in-service days, the Ursuline Secondary School will be closed on the first two Mondays back in January, Monday 8th January and Monday 15th January. However, St Angela’s Academy of Music will be open on both days for music lessons. So every student must confirm with their teacher that they will be in attendance or else make suitable alternative arrangements.

We wish all students, parents and staff a very happy Christmas and best wishes for the New Year!

We would like to draw your attention to a concert taking place at 7pm this Thursday 14th December in the Franciscan Friary in Clonmel. One of our own music teachers, Marina Buckley, will be participating in the concert. Below is a message from the Franciscan Province of Ireland regarding the event. We encourage you to attend if you can – it guarantees to be a memorable night of music!

From September to December the Franciscan Province of Ireland will run a series of free concerts at our Friaries around the country as a thank you to all the people who have supported the work and ministry of the Franciscans both locally and at national level.  We are inviting Franciscan-hearted people to join us in creating a hope-filled world where “we bring joy where there is sadness, hope where there is despair, faith where there is doubt”.

The concerts will highlight the need to care and nurture all of creation.

We have commissioned a new composition of the Canticle of Creation written by St. Francis of Assisi.  The Canticle is a hymn of praise that inspired Pope Francis in his second encyclical ‘Laudato si’ which he wrote on June 18, 2015.

The composer is Vincent Kennedy from Dublin and the work will be performed by  Marina Cassidy ( Soprano and Harpist)  from Killarney and by Vincent Kennedy playing Trumpet. 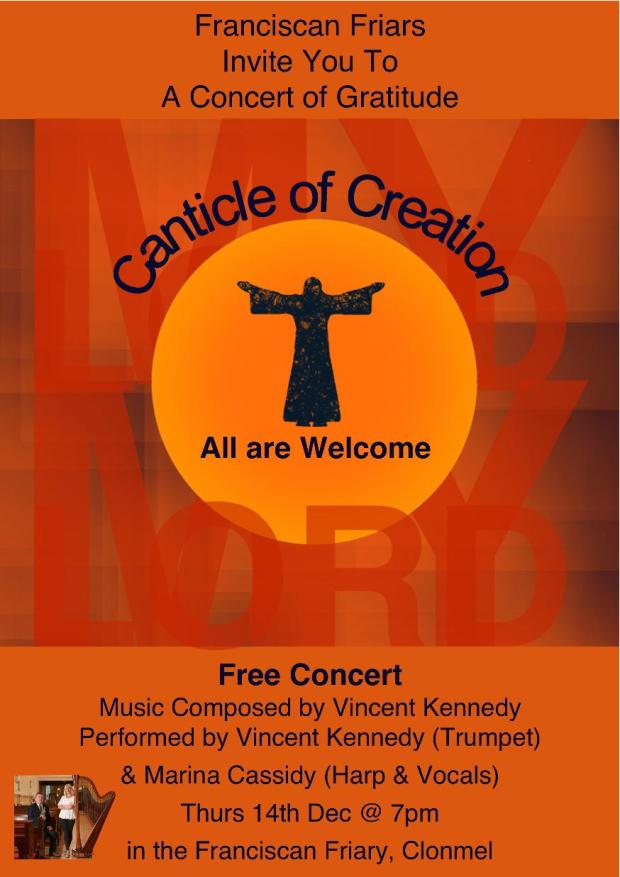